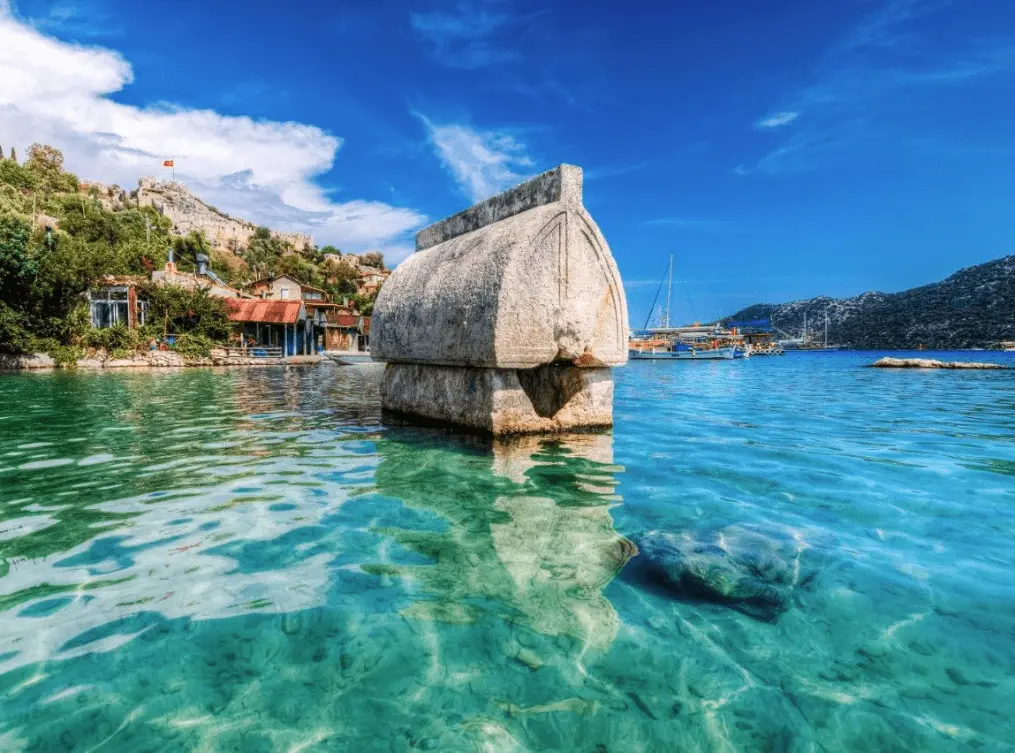 Kekova Island (Lycian: Dolichiste), known as the Sunken City, is a small, rocky island off Kale-Kaleköy and Trinity in the demre district of Antalya Province. With the agreement in 1932, the island was left to Turkey by Italy. It is one of the mysterious places you must see with the nature and history of Turkey.

Four ancient cities in the Lycian City states of Simena, Aperlae, Dolchiste and Teimioussa were represented by a vote in the assembly in Patara, although they were small settlements.

Kekova Island is a UNESCO World Heritage Site candidate with its archaeological Trinity and Kaleköy settlements and visual and natural features along with the sunken city surrounding the island. With the earthquake occurring in the region in the 1st century AD, 2 centuries and 7 centuries, the city was partially submerged by sea level rise. Although kekova island was once flooded by earthquakes connected to the mainland where the ancient city of Simena/Kaleköy is located on the opposite coast, its traces are still visible today.

It is banned for swimming and diving in historical sunken areas. The city, which was rebuilt and redeveloped during the Byzantine Empire, was abandoned due to arab incursions.

Kekova Region, The land-based settlement of Üçağız an, the part with hostels and cafes and accessible by boat consists of Kaleköy (Simena) and Kekova Island on the opposite coast of the island.

How to get there, What to do?

Kekova can be reached by boat or by road from Kas and Demre to go to Üçağız. You should take a boat tour to see Simena/Kaleköy, Kekova island/sunken city, Aquarium bay and pirate cave.

A swimming break can be taken at Shipyard Bay, which falls on the western side of the island, and only here you can go to the island. This shipyard is a place where repairs are made to ships that come here not for shipbuilding but for trade. You can also see the remains of the church, which belonged to the Byzantine period, in the bay. After the shipyard bay, you can see the remains of the bathhouse, half of which were buried in the sea.

The view of the trinity is charming with 40 shades of blue sea waters and peaceful air. The wooden and stone houses in the village are one-on-one for those looking for calm with accommodation and places to eat and drink. The handicraft products of the ladies living in the region, their jewelry from the shell are very beautiful souvenirs for you and your loved ones. You should also definitely taste the natural goat milk ice cream varieties.

Kaleköy (Simena) is accessible by boat from Üçağız Village. A magnificent image of history and culture descending the slope as you dock by boat greets you, make sure this moment will instantly refresh your memory. You can walk to the castle on the hill that gives it its name. The museum has a card entrance. Don't hesitate to come from Anatolia or the big city and I'm sure the view you see when you get to the top is worth it. Inside the castle there is a temple, watchtowers, a water cistern and surrounding walls.

On the western side of Simena-Kaleköy, you will pass through the narrow gaps between the houses and see the sarcophagus in the sea that we see in the symbolic photos of Kekova and the region. Do not return this moment until you assimilate it into your memories and photograph it. As a result of the earthquake in this sarcophagus, you will find that it remains in the sea. With love from Kekova, Trinity and Simena...